Encountered during The Liar’s Gambit 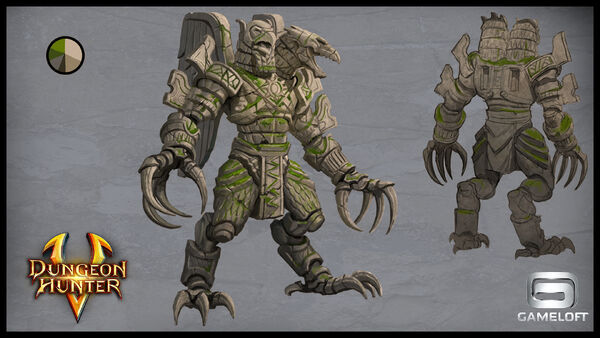 The Immortal Gatekeeper is the champion variant of the Light-based Guardian minion type. For its size, its a relatively fast and powerful beast that excels in long and short ranged damage. It has the ability to project stun-inducing lightning bolts and execute a whirlwind attack that continuously damages foes. The gatekeeper can also summon multiple gargoyles to its assistance.

In this mission, bounty hunters will have to fight against two Gatekeepers one after another, as brought to life by Syrann. A word of caution: each Gatekeeper will plant a Totem of Might when their HP falls below a certain percentage. This totem makes them almost invulnerable to any normal attacks or spell damage and it is advisable to destroy the totem first before taking down the Gatekeeper itself.

Retrieved from "https://dungeonhunter5.fandom.com/wiki/Bosses_Act_I?oldid=15385"
Community content is available under CC-BY-SA unless otherwise noted.